Dr Mohsen Danaie, who works at the UK’s synchrotron, has valid visa but was sent letter warning of forcible removal

The Home Office is still sending out letters telling lawfully resident immigrants in Britain they must leave the country, a month after the home secretary had to apologise for “an unfortunate error” in mistakenly informing 100 EU nationals that they faced possible deportation.

The Home Office had to issue a further apology on Monday to a research scientist, who received a letter out of the blue on Friday telling him his driving licence was being revoked and he “should take steps to leave the UK immediately”.

The Immigration Enforcement letter, in which his name was spelled incorrectly, warned Dr Mohsen Danaie that he could face six months in prison, forcible removal from the UK and a ban on returning to Britain for up to 10 years if he did not leave voluntarily. It was issued by the interventions and sanctions directorate of the Home Office.

Danaie holds Canadian-Iranian joint citizenship. He is an electron microscopy scientist who has worked since October 2016 at Diamond Light Source, the UK’s national synchrotron, based at Harwell science and innovation campus in Oxfordshire. He has a work visa valid until September 2019 and previously worked at Oxford University’s department of materials.

Danaie went public with his case after the Guardian highlighted the introduction of “hostile environment” immigration status bank account checks last week, and following an assessment by the chief inspector of borders that there was a 10% error rate in Home Office records used for some forms of enforcement action.

“I happen to be in that 10% statistic. Despite having a valid work visa, I received this letter,” he said. “It hurts on so many levels. They even have a typo in my name. Such disarray is astonishing in an office responsible for security.” 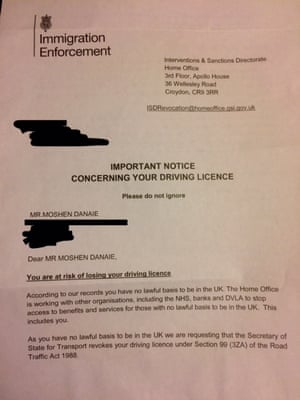 Prof David Dye of Imperial College London backed Danaie by making a direct appeal to the home secretary, Amber Rudd, saying: “It’s hard to staff places like @DiamondLightSou when you do this. It’s beneath you. Please apologise and fix.”

After Danaie contacted the Home Office and insisted he did have the legal right to work in Britain, he received a terse apology, saying it had updated its records and, following a further review of his case, decided not to revoke his driving licence.

“We appreciate your assistance in this matter and apologise for any inconvenience that might have been caused,” the Home Office said.

Danaie said he felt offended by the letter and its self-assured tone: “It did not leave any doubt that we have to get packing immediately.”

While there was a phone number to call for assistance with a “voluntary return”, he said, there was no number to dispute the basis of the letter. Instead, he had to rely on sending an email and hoping somebody would respond within a 10-day deadline.

“It also left me curious to know what exactly was the bureaucratic process behind the letter. How could they possibly get my name wrong, but my address right? Did someone just type that information off a physical dossier? How advanced is the infrastructure at the Home Office? Should we not fear for our safety?” he said.

A Home Office spokesperson said: “We can confirm that Dr Danaie is entitled to be in the UK and holds a valid work visa. We have written to Dr Danaie to reassure him that he will not face any enforcement action and we apologise for this error.”

Categories: Home Office Blunders, Immigration
Tags: Home Office Immigration Immigration Blunders Work Permit
Lawyer administrator
Prev postNext post
Theresa May’s ‘arbitrary’ visa scheme denies entry to thousands of foreign doctors, engineers and scientists with UK job
Read More 0
Home Secretary admits 63 Windrush migrants may have been wrongly deported and brands hostile environment ‘un-British’ As many
Read More 0
Guidance for Commonwealth citizens 1. Legal background Recent changes to the law mean that if you wish to work,
Read More 0
Michael Braithwaite, a special needs assistant, was told he could not be employed at school as he did
Read More 0
Commenting on the Home Office’s statement on UK immigration policy during the planned transition period following the UK’s
Read More 0
Another Home Office scandal: Renford McIntyre, Commonwealth citizen threatened with deportation They have lived nearly all their lives
Read More 0
Read More 0
Read More 0
You can apply for a Tier 4 (General) student visa to study in the UK if you’re 16
Read More 0
Economic migrants are living in administrative limbo without passports for up to two years because of Home Office
Read More 0

You can find out more about which cookies we are using or switch them off in settings.

This website uses cookies so that we can provide you with the best user experience possible. Cookie information is stored in your browser and performs functions such as recognising you when you return to our website and helping our team to understand which sections of the website you find most interesting and useful.

You can adjust all of your cookie settings by navigating the tabs on the left hand side.

Strictly Necessary Cookie should be enabled at all times so that we can save your preferences for cookie settings.

If you disable this cookie, we will not be able to save your preferences. This means that every time you visit this website you will need to enable or disable cookies again.